After having reviewed a number of different microSD cards, the next step could only be compare then over a number of perspectives, each of them making sense to a significant number of users. Now, I believe it is quite obvious for everyone that there isn’t probably a best microSD card but it really depends on which parameters, or ratios between parameters are relevant for each one. Each of them will then represent an important benchmark by itself, so let’s detail each of them:

Now, after introducing the relevant topics, let’s meet the contenders.

All of the cards present on this shootout were specifically reviewed, but how they fared in comparison with others was missing. So, let’s recover the introductions for the cards and move on.

Read performance gives an overlook on the quality of the SD controller implementation, and specifically on which SD bus is supported. In this case, we would see cards grouping themselves around each of the buses performance boundaries: 25MiB/s, 50 MiB/s and 104 MiB/s. 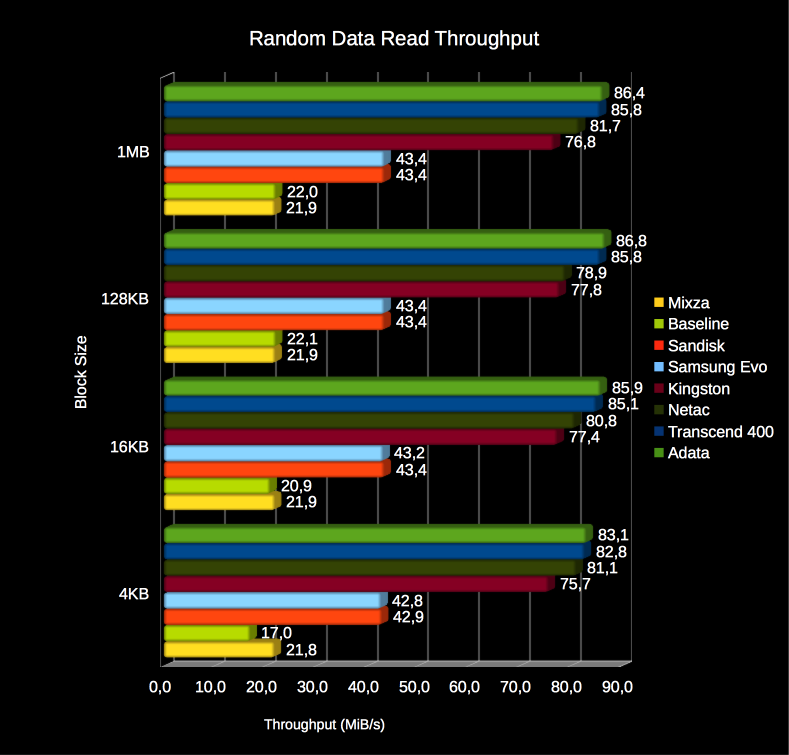 Et voila… you can clearly distinguish the expected three groups of SD cards:

The point is, if your thing is read performance, only the SC cards support UHS104 bus will suit your needs: Transcend 400x, Netac, Adata and Kingston. What is most striking here is how much technology has evolved into multiplying performance by 3 fold, when we compare the faster SD card with our baseline. It’s also worth noticing how major brands such as Samsung and Sandisk are absent from this group…

Write operations is where most low cost SD cards fall to their knees, and as it directly depends on the flash quality and hence cost, what most affects the selling price. 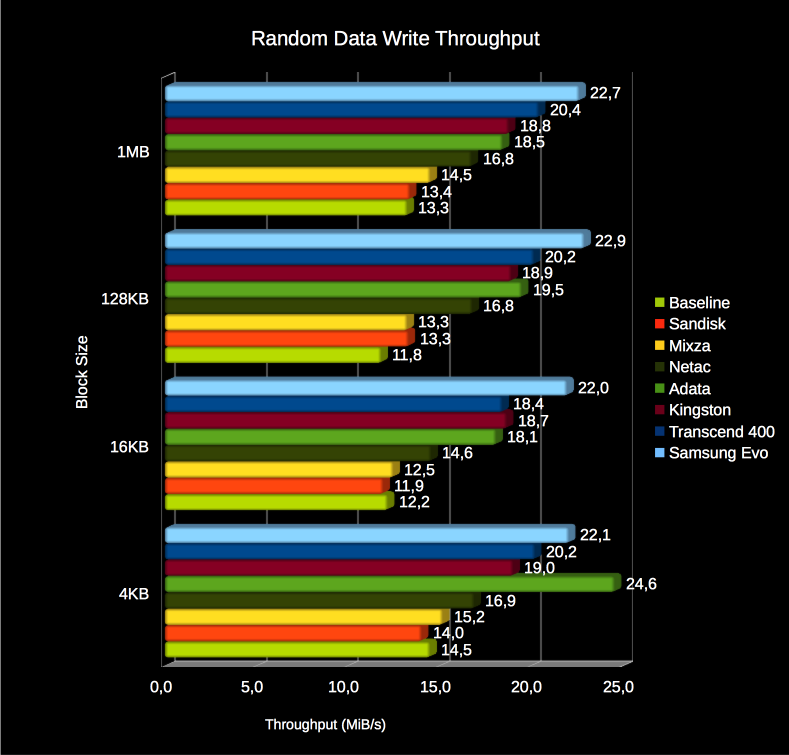 Write performance is where we set apart kids from grown-ups, and how evident this is. Ignoring that off-the-scale value on the 4K block size from Adata, which we consider a measurement mistake, this chart is completely dominated by Samsung, which if you think of it is quite natural. Samsung is the biggest flash manufacturer in the world, and probably supplies most flash devices on the reviewed SD cards. It’s then only natural that on the products is sells offers the highest quality and performance coming out of it’s factories.

Right next, with a 10% disadvantage, we have Transcend, and this is an important position, as it’s the first SD card to be present on both Read and Write podiums, and again with another 5% down, Kingston and Adata. It’s then worth noticing that it is possible to have high read and write performance within the same low end product.

Going lower on the rankings, we can find Netac right in the middle of the performance range, with around 25% performance than the Samsung card, the finally the lower performance group of cards, which includes Sandisk, Mixza and our baseline. The delta between the highest performant card and our baseline is less than 50% which is somewhat a disappointment, but the capacity increate is impressive, up to 10 fold.