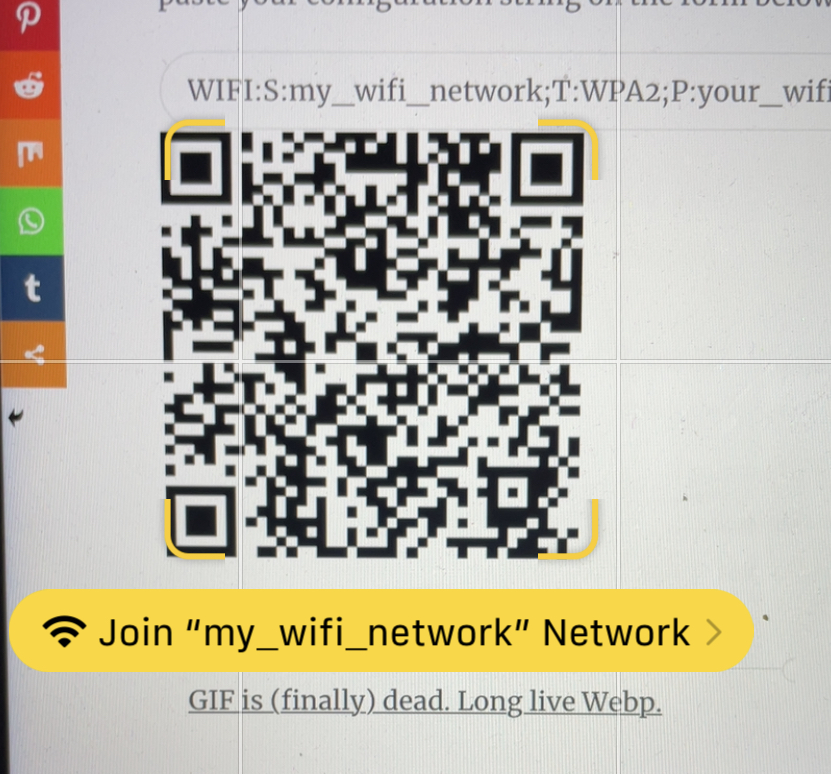 Sometimes Apple develops great functionalities, and then forgets to announce it. Well, maybe Apple did it because Apple also didn’t published the proper tools to make it work from an end to end perspective. This one of those cases.

One of the most annoying duties when receiving friends at home, is to share your wifi password. I mean, your guest wifi password. On modern iOSs, Apple does make it easier, by allowing you to share wifi passwords with your contacts. Unfortunately, although it works most of the time, it still fails. And when it fails for the first time, you can’t try it again. There’s no way to request it again. Finally, that only works after you tell your friends which is the actual wifi network SSID. If you’re a security freak, and SSID broadcast is not your thing, that’s not gonna work.

So, wouldn’t it be wonderful if it would possible to share your guest wifi password by simply scanning a QRCode to your friends. It is. And there’s already a few Applications that generate those QRCodes, if you put your wifi name and password on the application. Assuming you trust the application developers.

Some time ago, Apple added a very basic feature to iOS 11: the ability to read QRCodes using the iPhone Photo app. Then, it also added the ability to configure Wifi, using a very special format. So, we just need to know what that forma is, and get a trusted method to generate a QRCode.

Let’s say you already have set up a guest wifi network, and now you just need an effective way to share its settings with your guests. This is how:

The wifi configuration string has the following format:

The only thing not obvious here is the wifi_security, which can be “WPA”, “WPA2” or “WPA3”

So, assuming the following parameters:

You get the following configuration string:

Generating the QRCode can be done on any QRGenerating tool out there. You just need to trust the website or you load on Javascript-only QRCode generator, such as the one below. If you’re a security freak, you’ll want to create an air gap by disabling your internet connection. If not, just paste your configuration string on the form below and press enter.

Well, you could just point your iPhone camera at the QRcode, which would result on the following but that wouldn’t be that useful. I order to be useful, you’ll need to have it visible. So, next right click on it, save it to your laptop, and print it where your friends can see and scan it as soon as they walk in you door.