Edit: This is the first half of a 2 part port regarding USB3 ethernet adaptors running on MacOS. The second part looks at actual performance.

There aren’t a lot of good reasons why one would care about getting an USB3 Gigabit Ethernet adapter, and all start with “I need an extra wired gigabit connection”. And this may not be as weird as it seems as most MacBooks lack a single embedded wired gigabit interface. As an alternative you get the Thunderbolt adapter (in it’s native Thunderbolt port, or using the new USB-C connectors), USB3 adapter or 802.11 WiFi connection. Current state of the art 802.11ac wireless routers top at 3200Mbps, but that figure comes with a few foot notes: that 3200Mbps cannot be achieved by a single host, which is actually limited to 2200Mbps. Even at those values, real world performance doesn’t even comes close to a proper wired gigabit connection.

Taking as an example a fairly common AC1750 connection, supporting 1300Mbps 5GHz wireless connection, you can barely reach 45% useful throughput of less than 600Mbps when using one single direction.

If we have a look at duplex performance, things seem even worse:

Wireless networks are known since its inception to have severe performance problems on non optimal conditions, and things haven’t changed that much. So from a maximum theoretical 1300Mbps, performance goes down to 591Mbps on a mostly simplex test, to 527Mbps on a heavy duplex test. Both represent a significant performance drop, as compared with the wired gigabit performance people expect to top at around 1900Mbps duplex performance.

However this values don’t properly describe the actual consequences on real world, where packet loss and latency also take a big part. For instance, performing a backup using TimeMachine is significantly faster on a 100Mbps fast ethernet than on this 1.3Gbps wireless link, never mind a full blown gigabit link…

So, whatever your motive, there are good reasons to get an extra gigabit adapter. You just need to chose the interface: Thunderbolt or USB3.

A tale of USB3 gigabit adapters

Two of those USB3 hubs with gigabit adapters landed on my desk, a no brand really cheap adapter from Bangood, and an Orico adapter from AliExpress (link for the updated version)

The Bangood hub and adapter is known as KY-688 is presented with a color packaging, and for some reason, specially targeted at Macbook users. Apparently Windows users don’t need extra USB3 ports nor Gigabit interfaces…
Other described characteristics include compatibility with Windows 7/8 and 10, a Fast Ethernet MAC and USB2.0.

Other than that, it does’t offer much more information. Opening it, we find a cheap looking black plastic USB3 Hub with an RJ45 connector and a 10cm USB3 cable connected to it. No option to
connect it to a longer (or different) cable as it is part of the hub. Obviously, if this cable dies, the hub
dies with it.

Looking at the other end, we find the RJ45 plug, missing the characteristic LEDs for “Link” and “Link speed”. Those would have come very handy in troubleshooting an issue on this device, is it isn’t obvious if the ethernet link is working and at which speed, which would be of significant help, but more on that afterwards.

An important aspect is the lack of the now old CD containing the drivers for the gigabit adapter, nor an URL to download them.

This means one of two things: either the Hub embeds some kind of storage containing the drivers, or the it implements USB CDC-ECM device. If this would be the case, then it would be up to MacOS to contain its own USB CDC-ECM driver, which is a big plus by not having to rely on any 3rd party piece of code with dubious effects on the system reliability.

This would also explain why it is compatible with most all current operative systems, making it virtually plug and play.

Plugging it for the first time is an eventless discovery. No LEDs, no embedded storage device, no 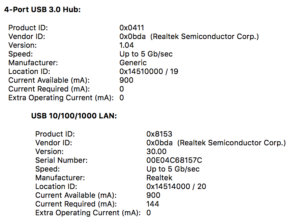 nothing. The only way to confirm that is was indeed on and working (without the obvious lack of smoke coming out of somewhere) is to have a look at the MacOs System report.

This hub is indeed recognised as an USB3.0 5Gbps capable hub, on which the forth port is already occupied by the USB3 Gigabit adapter. Both USB3 hub and the ethernet adapter are from Realtek, probably RTS5401 and RTL8153, which would only bode good things. next step: using and testing it.

When gigabit is not 1000Mbps

The first to notice when connecting a cat5e ethernet cable is that, as there are no LEDs present, it’s not possible to know what’s happening. The good thing is, this is in fact an USB CDC-ECM device, so no drivers are required and it should work out of the box, and indeed it does, to some extent.

The first thing to notice is the time it takes for the ethernet link to be detected by OSX. It takes more than 30 seconds. Regardless, let’s start with some tests:

Now, the 97Mbps is a very familiar figure, which a known literally for decades on Fast Ethernet links. This would not be a bad thing had we not connected a gigabit adapter with a gigabit switch to a gigabit enabled host. Something was not right…

A quick peak at OSX’s detailed network view confirmed the suspicions: the ethernet adapter was negotiating at 100Mbps instead of the expected 1Gbps. Crap… 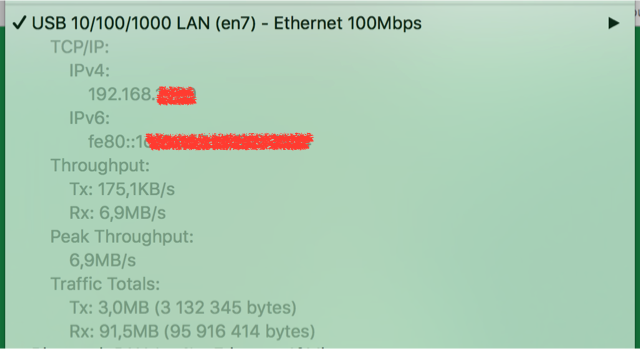 After this step, there’s little more we can do: force gigabit on the switch, on the host, use a different switch, try to disable ethernet low power, nothing worked… This adapter would not negotiate at 1Gbps. Game over.

Final step, get a refund com Bangood, which was done without any fuss.