Not to well… 1230Mbps aggregated bandwidth is nowhere near the expected near 2Gbps, but it still more than doubles what we can get from the 802.11ac link. Although USB3 does offer more than sufficient bandwidth to get there, it’s still a protocol not designed for duplex operations.

If this lack of performance is due to a poor USB3 implementation from either Apple, Via or Reaktek, or the actual USB3 protocol, there’s no information to support any of those hypotheses. However, history tells us that all the past USB implementations did suffer on duplex operations on both USB1.1 and 2.0. 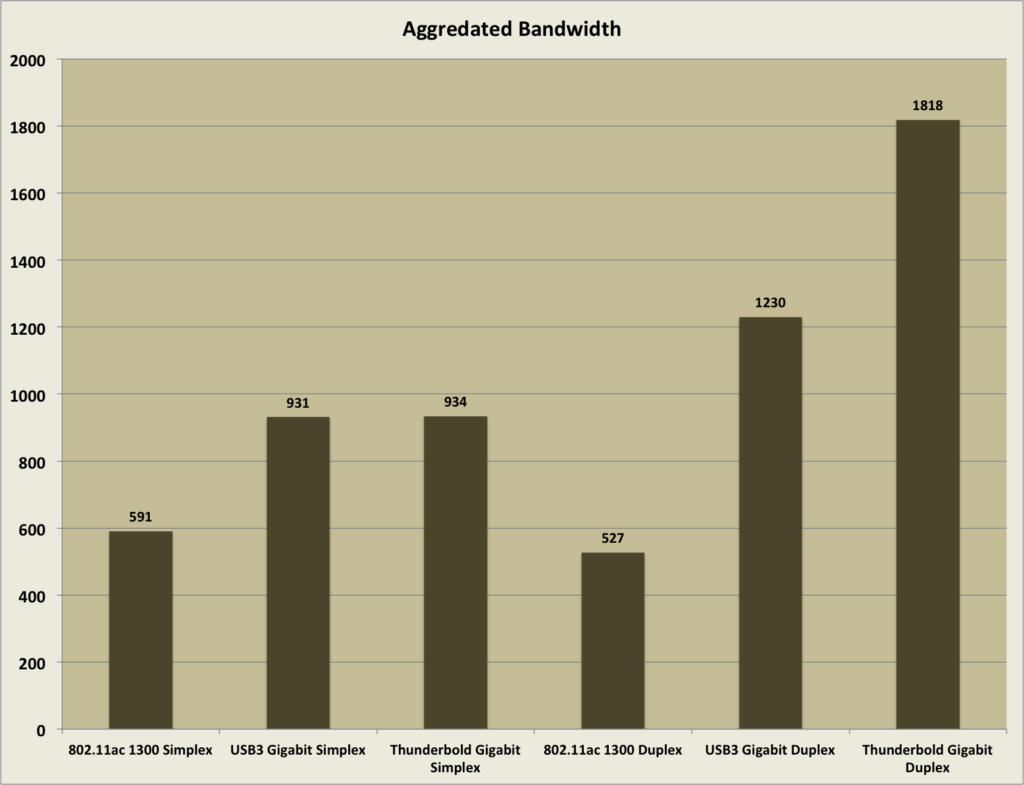 This chart really sums up the results and it’s all mostly simple:

Wireless connections are no match for a proper wired connection, whereas the 1300 figure is mostly meaningless. This is even more true when testing in duplex mode, where wireless links decrease the aggregated bandwidth as opposed to any gigabit wired connections

Thunderbolt is and will continue to be the best overall solution, however if you goal is unidirectional communications, the USB3 adapter matches its performance to a distance of 3Mbps.

USB3 ethernet doesn’t fare as well as Thunderbolt, but it’s near. On the unidirectional tests it does matches, but on the duplex test is lags behind, although not never at the low level of the wireless ac links.

USB3 isn’t the ideal solution for a full blown gigabit connection, however, unless you plan to host a very traffic demanding infrastructure on your laptop exceeding 1.2Gbps aggregated traffic, it’s enough. It’s even enough when troubleshooting most network issues on common infrastructures based on gigabit uplinks or even video backbones. For those, and everybody else, USB3 is an acceptable solution.