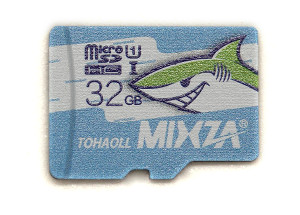 Mixza is a little known recent company founded in China in 2009, which produces solid state products. It doesn’t manufactures any flash chips, or SD controllers, as Samsung or Micron, as so many other brands out there, like Kingston, Mixza simply resells products manufactured by 3rd party factories, or to some extent, packages all electronic components in-house. This specific MicroSD chip was manufactured by Dynacard. 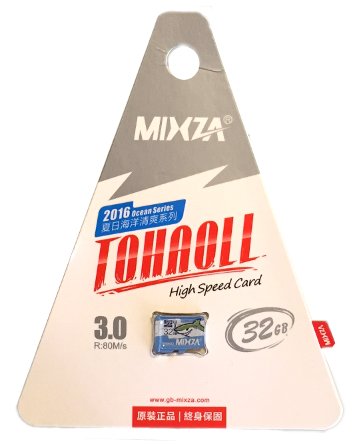 Starting on the packaging, it seems a strait-forward no-frills packaging, typical of low cost offerings. In this case the common anti counterfeiting scheme is present, in this case with a printed hologram plus a QR code. As usual, none of those do actually do anything on preventing counterfeiting other than increasing the cost of counterfeit product.

The MicroSD card under test is from the Ocean series, as we can see by the printing on the card itself, but unlike the Sandisk Ultra card, printing quality is quite good, although not perfect. But when taking into account the actual design Mixza’s printing feels much better.

This model is described as supporting Class 10 and UHS-1 write performance and up to 80MiB/s read speeds. This would mean that this card sports SDA 3.0 UHS104, which is somewhat printed on the packaging (marked 3.0), but probably only applicable to read operations. However, this MicroSD card was unable to negotiate UHS104 speeds, but limited to SDR25 bus speeds, so either this is simply not supported, or there are serious compatibility issues.

As the real data wasn’t matching the expected values, we drilled deeper into the SD controller, through CID and CSD registers analysis, with some very interesting results: none of those abide by the SDA specifications completely as some fields are either missing or carry wrong information. The important data is that this product was manufactured by Dynacard, and the reported maximum bus speed is really 25MiB/s. This means something went terribly wrong: either Mixza’s marketing department was not aware of the differences between SDA 3.0 specification and the actual SD bus speed, or someone procured the wrong parts and components. If you look at the real world results, you can see that read performance is limited by the SD bus, instead of flash performance, which is a shame.

As far as formatted capacity goes, it also displays a somewhat lower value then expected, around 29,4GiB, but this may be due to the extra flash used as spared.

Having certainty that this card SD Bus is limited to 25MiB/s sure limits our expectations. By exactly does it means against the baseline ? 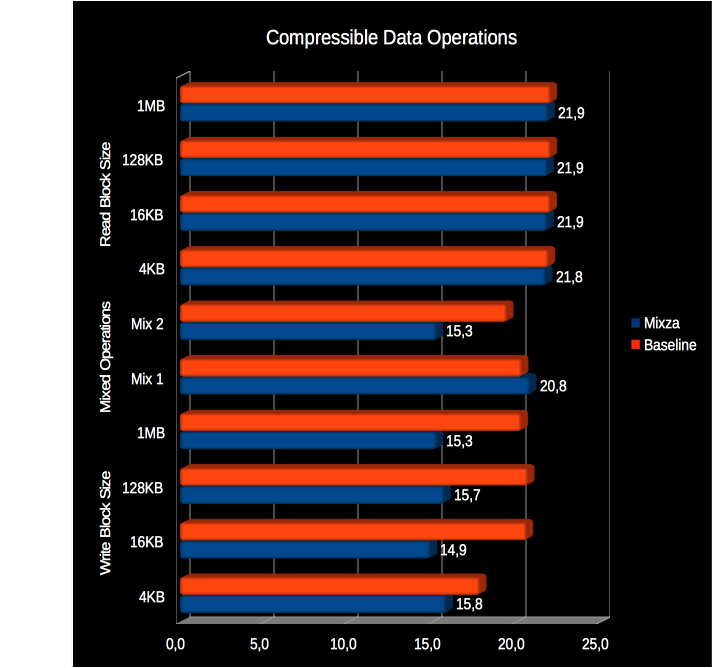 The Mixza MicroSD card is unable to achieve any performed gains versus our old SD card baseline. It sports the same old high speed SD bus, limiting performance to less than 25MiB/s. Now this seems to be a compatibility issue, as write operat. Compressible read performance tops at 21,9MiB/s, which is in line with our baseline SD Card. Actually there is one single case where benefits are visible, but only on the small block size (4KiB and 16KiB) transfer size, which on an MicroSD card is near useless. It does show that the controller is a few years younger then the baseline card, but little else than that.

We already know that this MicroSD card is limited by its 25 MiB/s bus, so we can already assume that write performance won’t be stellar… And it isn’t, it is actually worse than expected. Although it is visible than data is somewhat compressed when write data, it’s results is just barely visible, so little that it performs worse than our 5 year old baseline SD card. It’s actually one of the worst performance we can have on 2016 MicroSD cards. 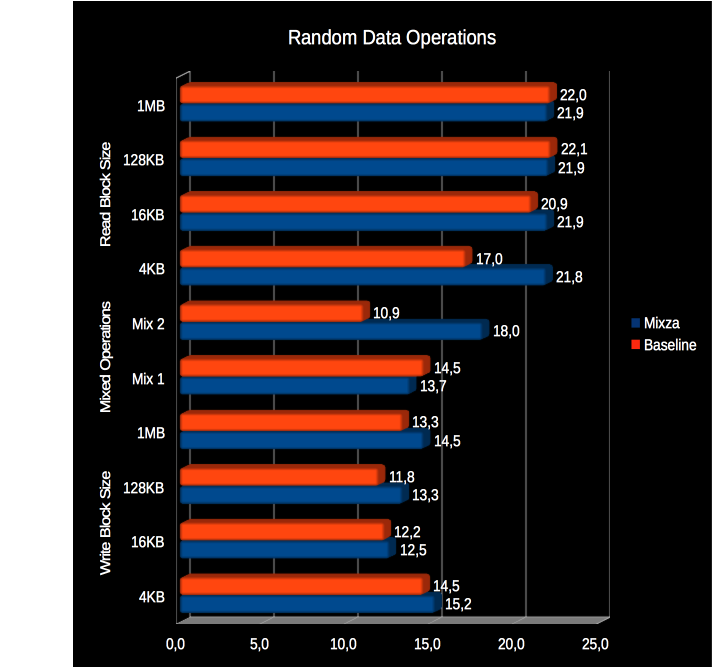 Nothing worth writing home about. Read performance is still limited by the SD bus, topping at 21,9 MiB/s. Same as compressible data read results, and in line with out baseline card. The exception being the small data block test, where the Mixza card is able to sustain the same performance levels as on the bigger block sizes, and it actually demonstrates that there isn’t nothing wrong with the flash components, nor on the controller. Every thing evil on this card is SD Bus related.

For the most relevant test, the Mixza Tohaoll MicroSD card shows weird results: write operations are faster on random data than on compressible data. This demonstrates a number of details: there is a compression scheme working, and this scheme is poorly implemented. This in turn raises some alarms: why implement a performance degrading feature, unless you really don’t trust the quality of the flash memory embedded? AND, why even bothering doing this if the nominal use case of for random data, thus rendering this feature useless if the goal is to enhance the flash endurance? Well, we don’t do endurance tests, at least for the time being, so this question will remain open, but it does raises important questions.

At the end, write performance is still poor, at around 15MiB/s, bellow our baseline our SD card.

Finally, mixed performance predictably poor, on both cases. However this is one of the few instances where it can surpass our baseline card. On the random data mixed performance the flash controller really comes up on top, again being limited by the SD Bus.

Apart from the graphical design which undoubtedly sets it apart from the competition, the Mixza Tohaoll MicroSD card has nothing to offer in terms of performance. It does leaves it’s distinguished brand in the world: when you’re building a product, it needs to be balanced, both on cost and at each component level. This card seems to carry some not so bad flash components and controller, only to be betrayed by an poorly implemented SD Bus, actually everything SD related, not only bus, seems to be poorly implemented. Avoid unless absolutely necessary.