So, after all presentations are done, lets have a look at the results. 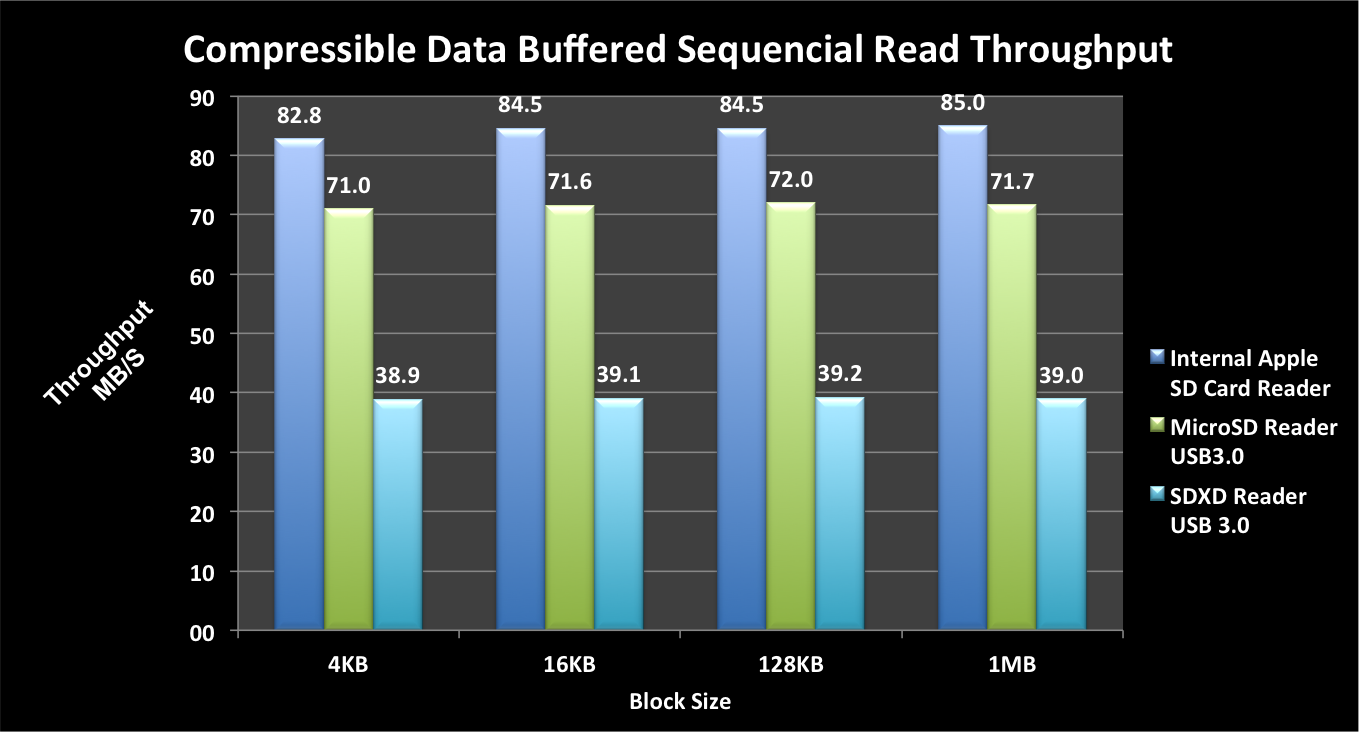 Although this is the first test, results are already eye opening. Both Apple and Micro SD reader are able to achieve very high figures, with the Apple device taking the lead. However, the SDXC USB3 Reader already shows problems, as it cannot even achieve the 40 MiB/s mark. This means that is can’t support UHS1 high bit rate modes, and is limited to either SDR50 or DDR50, regardless, it cannot ever do more than 50 MiB/s, which is a shame.

Also, it seems apparent that both adapters and SD cards are somewhat tuned to large block sizes of more than 128KiB , which makes all sense taking into account the normal usage for such devices. 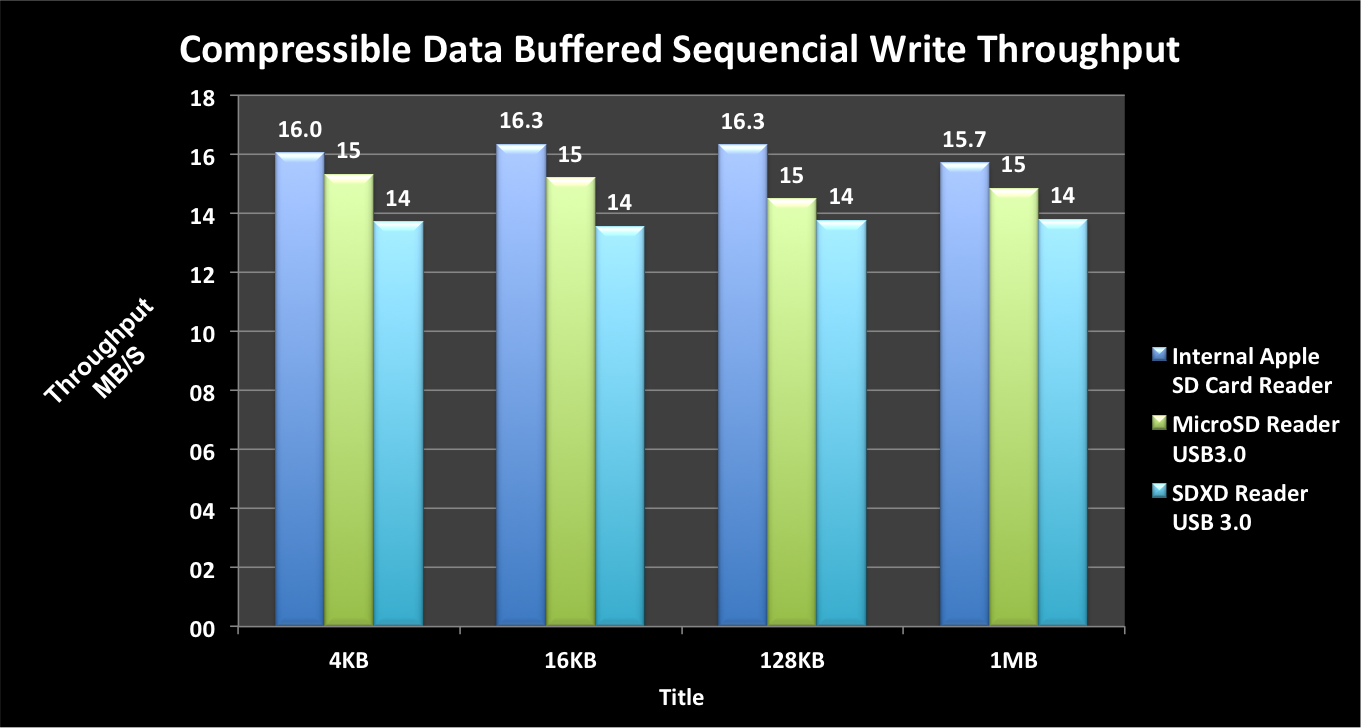 This is the reason why SD cards are still classified by its write speed. Although bit rates of almost hundred megabytes per second are supported while reading, when writing the speed is less than a fifth, not exceeding 17 MiB/s on all devices. However, results were somewhat similar to the read tests, whereas the Apple adapter still leads by a small margin, and SDXC USB3 Reader still trails but also by a small margin. It’s clear however that the SD card itself is the main performance constrain, but there are significant differences in implementation, though. 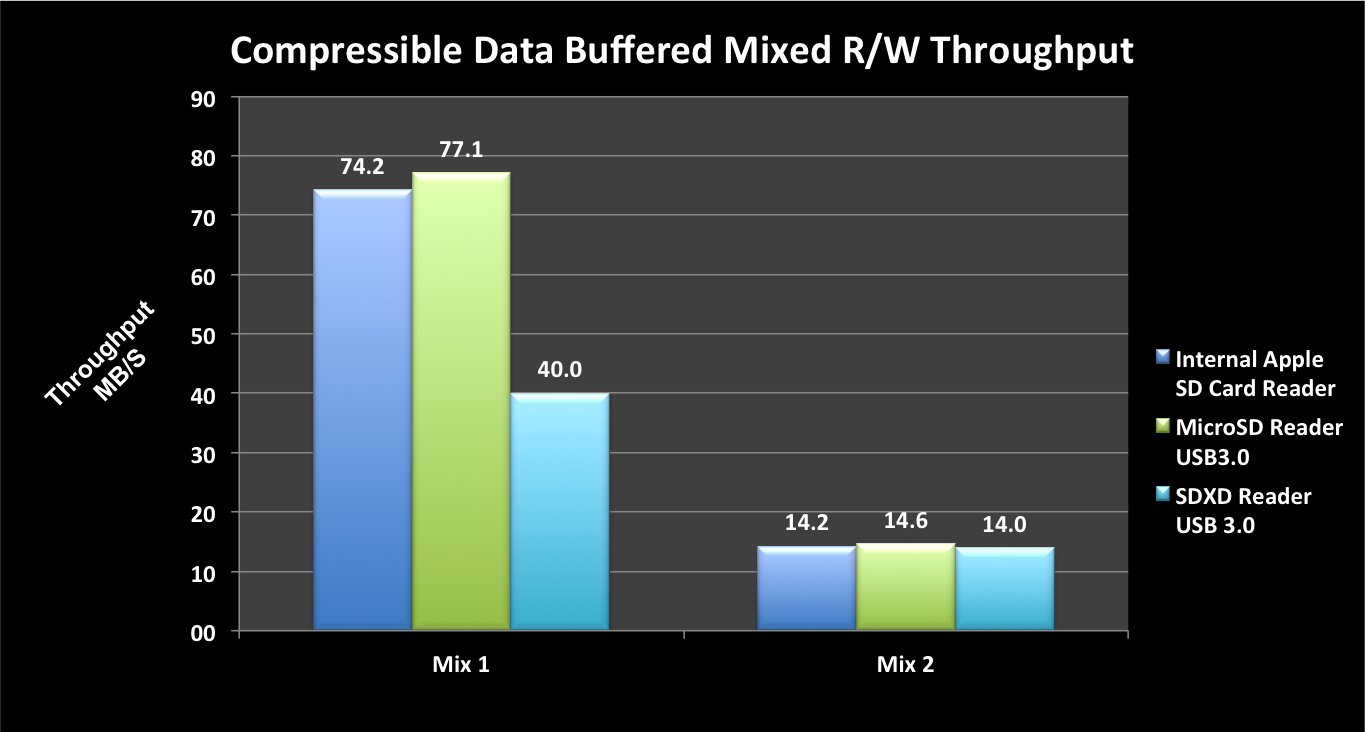 This test the the harshest of them all, as it stresses the SD readers down to the bone. Although none of the available SD Readers support USB Attached SCSI (UASP) which would give it a boost on this specific test, by parallelizing read and write operations, results are quite revealing of the end to end reality.

To some the Apple reader doesn’t come out in the top place. Albeit by a small difference MicroSDXC USB3 Reader wins this test, both on mix 1 and on mix 2. Then, to no surprise, SDXC USB3 Reader comes in last, specially on mix 1 where reads are most import, and where it gets almost twice as slow as the other devices. Also, note that when you get a very low read to write ratio, performance drops significantly, even lower than having only read operations.[showad block=2]