Finally, there is a test with can be used to measure how well the SD controller is designed and how balanced the SD card is: the mixed operations test. 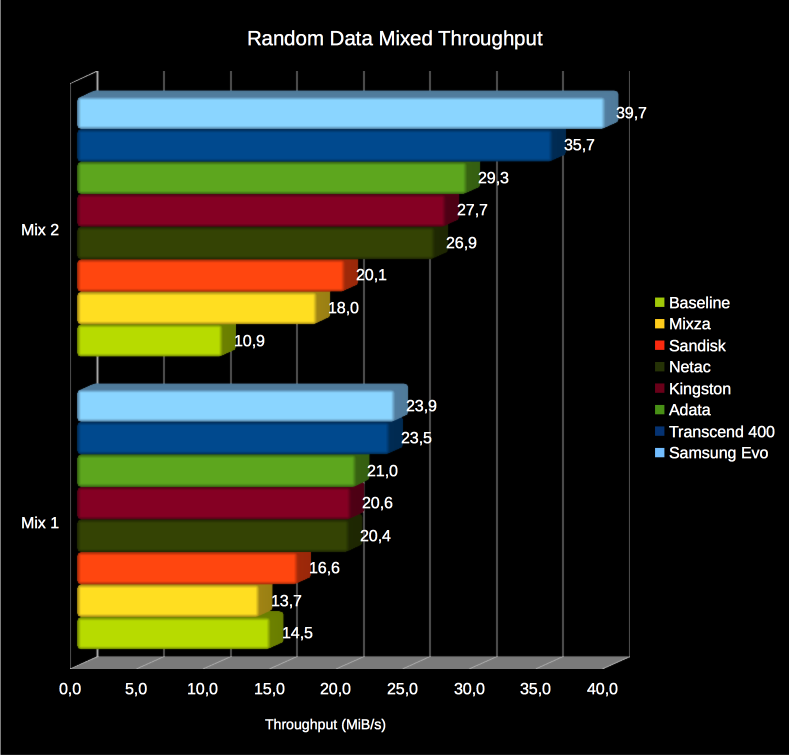 In this case, both mixed scenarios should be relevant, but interestingly enough, both show mostly the same results: Samsung and Transcend lead them in both. The Samsung microSD card has a significant read performance limitation, but the even with that limitation it’s able to interleave read and write operations with a brilliant controller implementation and flash, giving it the overall lead on both tests. Transcend probably did a similar job, but shows the usual compromise, better controller bus support in exchange for worse flash, giving it a close second place on both tests. Worth noticing is that  UHS104 support is not only sufficient for make it to the top in this test, but the card which actually wins is not sporting it. However, it seems to be sufficient to land on the middle of the pack. There a group of cards with very similar mixed performance: Adata, Kingston and Netac, all of which do sport UHD104. Finally, the find the laggers group, finding surprisingly Sandisk among them, side by side with Mixza and the baseline card. How Sandisk allowed such a bad product carry it’s brand is something that can not be understand not overstated.

Very often we say that not all 32GB have the same size, but the scale of this difference is often understated, as we can see. 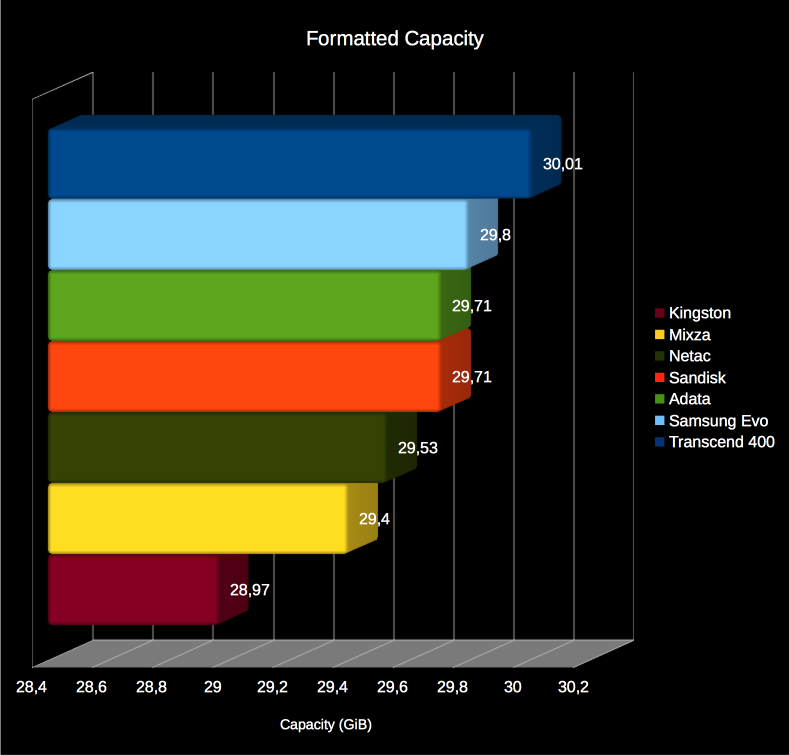 The same 32GB can mean different things to different manufacturers. From 28,97GiB to 30,01GiB, a difference larger than 1GiB. Again we find the usual suspects at the top Transcend and Samsung, but this time leaded by Transcend. Now, Transcend doesn’t manufactures flash, and Samsung does, which would question how does Transcend manages to achieve this, but this can have different questions: Transcend can simply put more flash in the place or reserve less area because it believes its flash is simply better. Unfortunately, unless we do endurance tests, we’ll probably never have an answer for this. Regardless, having more formatted capacity gives a distinct advantage on the price per GiB ration, allowing higher prices. Now, how is this information passed to the consumer is a whole different question…

Interestingly enough, at the bottom we find Kingston, with a 400+ MiB difference to its closest competitor, which can only bring into question the confidence it has on its flash and raising the same dark clouds of Kingston quality control of the past.