What most consumers are looking for is price. Price for the same capacity, in the case 32GB, and the same microSD category, Class 10 or UHS-1. Again, there are significant differences. 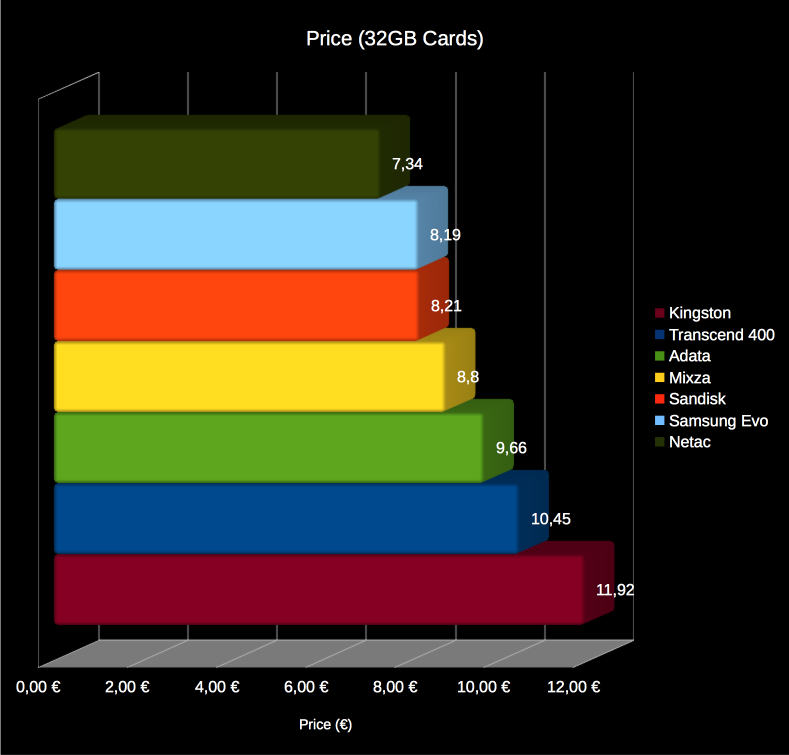 The difference between the highest and lowest cost card corresponds to 38% of the lowest priced card, which is rather significant. However, this benchmark fluctuates heavily depending on there you buy your cards, as not all of them are available on all stores, and then there are significant geographical differences. However, it’s worth noticing that on the microSD cards that is present on most stores and near this benchmark’s top is Samsung…. However, Netac is leading this benchmark by around 10% from the runner up, which is a very significant difference.

On the other end, we find Kingston and Transcend as the highest priced cards. Now, unlike Kingston, Transcend has consistently been around the top on all performance and capacity benchmarks, which can make it competitive, but I don’t see how this would work for Kingston.

Now we get to what matters most for some people: bang for the buck. If you’re satisfied by a basic class 10 performance, and you’re never in a hurry, then what should matter most to you is how many GB your money will buy. Is may result in different results from price alone, as not all microSD cards actually make available the same capacity.

Well, actually it doesn’t. Capacity differences aren’t enough to offset the differences in price, and the ranking on this benchmark is exactly the same as the in the absolute price benchmark. To demonstrate an obvious example, the microSD card with most usable capacity is Transcend, which by having the second highest price, is still in the same position in the price per GiB ranking. It does manages to move itself closer to the competition, but isn’t enough for anything else. The only real fact worth noticing is actually fairly obvious: when you have both bad pricing and low capacity, you get a lonely last place in the cost per GiB ranking, which is exactly what happens to Kingston. In this case, Kingston is almost 20% more expensive than its closest competitor, Transcend.